Most of this historical overview is adapted from the 100th Anniversary of Grace Lutheran Church commemorative book prepared in 2010.

The earliest Lutheran work in Victoria was done by a group of Icelanders, beginning in 1890. A regular pastor could not be secured so the work of those families was dropped. Eventually the mission efforts of the Rev. William Drahn, working on behalf of the Pacific Synod of the United Lutheran Church of America (ULCA), led to the formation of what is now known as Grace Evangelical Lutheran Church (GLC).

The first service held in order to establish an English Lutheran congregation in Victoria was held in the Knights of Pythias Hall at the corner of Douglas Street & Pandora Avenue on August 1, 1909. There were 9 people present at the morning service and 15 at the evening service. Following worship on August 22, it was decided to take steps toward a permanent organization when a committee of four was struck to draft a constitution. The first Constitution was approved at a meeting held on September 19 when the original name of the congregation was adopted: Grace English Evangelical Lutheran Church. 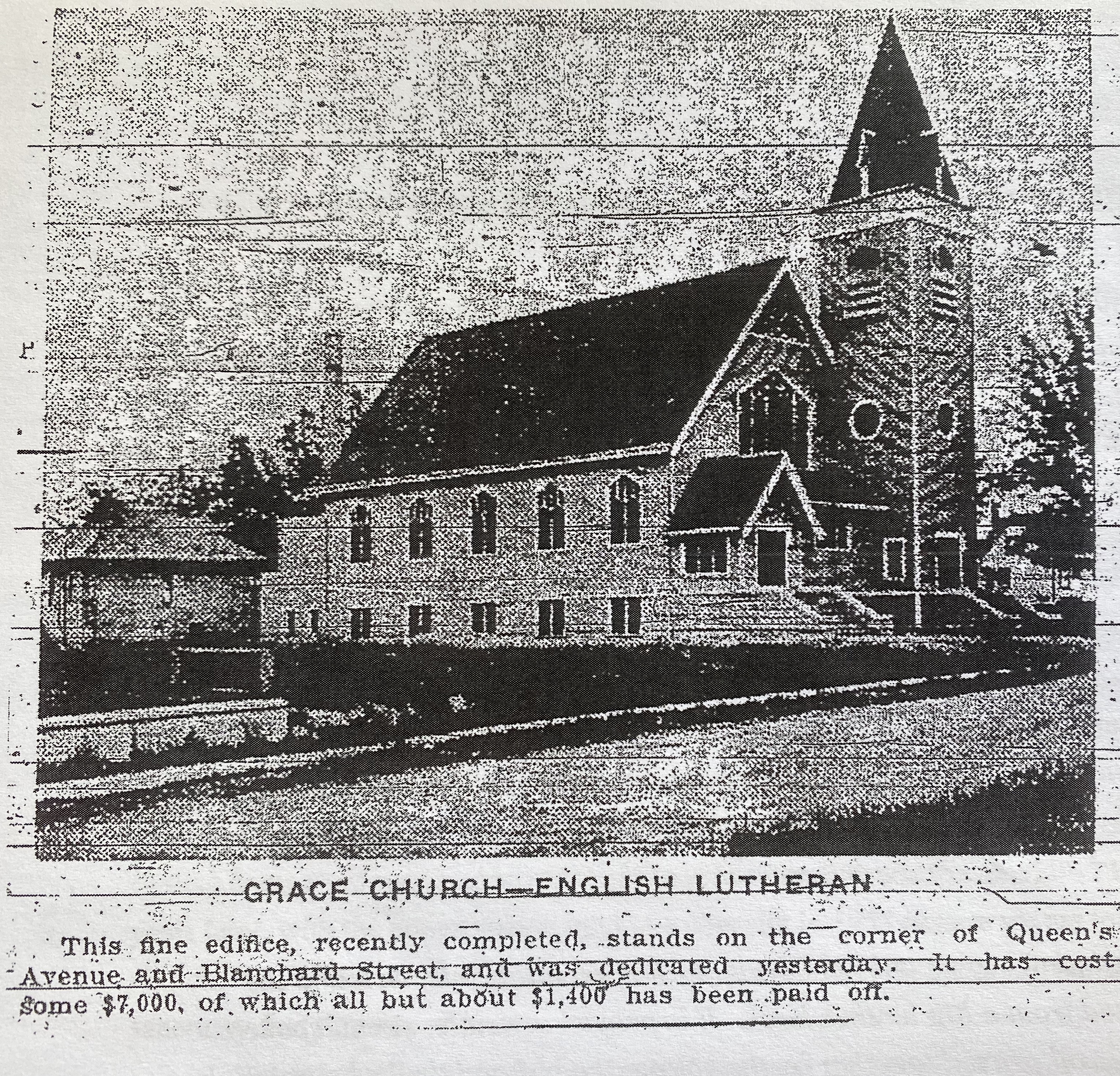 On December 6, 1909, the church was fully organized with its Constitution adopted and officers elected, but the charter for the church was not issued until January 7 of the following year. In a sense, then, the formation of the congregation spans both the years of 1909 and 1910, especially as the congregation’s first building was constructed in 1910. While it was being built, the congregation worshiped in a borrowed tent and later in the A.O.F. Hall at 1415 Broad Street. Upon its completion, the church building (at the corner of Queen’s Avenue & Blanshard Street) was dedicated on June 25, 1911, with the President of the Synod, the Rev. M. Boulton, in attendance. During the summer of 1912, parsonage plans were considered and a loan agreement was crafted, but nothing was done.

For a time during World War I, the work of the congregation, including worship, was discontinued entirely. In fact, GLC became the only casualty of the Pacific Synod due to the war. Feelings against the German people were especially strong in Victoria; the fact that there were many Scandinavians and English-speaking people in the congregation made no difference. The spirit of the congregation, however, lived on; and it was reorganized on November 29, 1920. In 1921, the lot next to the church was purchased; by October 1922, the building was ready for plastering.

In April 1924, one of GLC’s longest serving pastors, Rev. Theodore Jansen, arrived. From his first council meeting onward, he faced some real problems. In attempting to pay nearly $700 in pressing bills by placing a mortgage loan on the church building, he discovered that mortgages already on the property amounted to 10 times that amount—the larger portion interest bearing and forgotten since 1910. Pr. Jansen helped the congregation tirelessly to pay a little here, a little there, until the arrears were finally settled. When GLC celebrated its 25th anniversary in 1934, the membership was 103 baptized and 76 confirmed members.

Through the ensuing years, there were several different pastors; some were called, some were interim. Members were received and then moved to parts unknown. Finances were a continuing struggle.

In October 1953, the congregation called Rev. Paul Hoch as its pastor. On that same day, they voted to sell all of its property and purchase the property on Fort Street for the new church site as well as a parsonage at 76 Moss Street. While the church was being built, worship services were held in the YMCA. Much of the construction work was done by the members themselves. The ghosts of financial threat were faced with determination and dedication by the church’s members. On March 3, 1957, the new church building at 1273 Fort Street was dedicated with several of the congregation’s former clergy in attendance as well as the Rev. L. H. Steinhoff, President of the ULCA's Pacific Synod, of which the congregation was a part.

The 50th anniversary in 1960 was observed with a special dinner. In 1962, the congregation voted to be a part of the merger that led to the formation of the LCA—Lutheran Church in America and, consequently, a part of the Western Canada Synod of LCA. In October 1964, Rev. David Metzger came to begin his long pastorate. With his leadership, the present church sanctuary was built in 1970–71 and a 365-pipe organ was installed in 1972. Both events were celebrated with great fanfare. As well, he began a monthly newsletter called The Lamplighter, which was very popular with the membership. It became an important factor in linking together members of the congregation and making them more aware of what was happening in the church on synodical and national levels. Pr. Metzger was also known for his ecumenical work with the Greater Victoria Council of Churches. In 1973 he left GLC in response to another call. 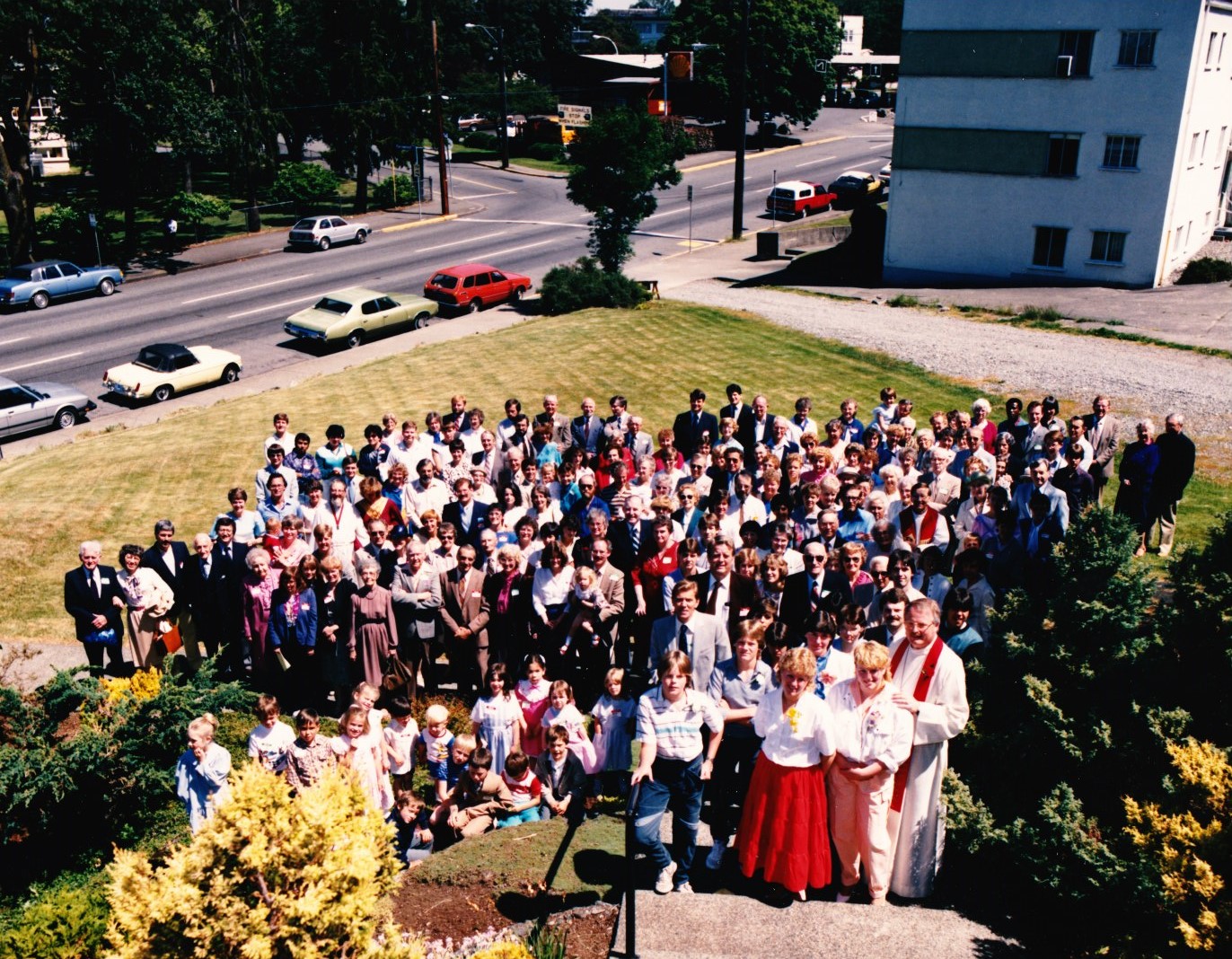 The worship and overall life of the congregation continued to thrive with the leadership of Rev. Ron Nelson, who arrived in 1973. With his guidance, challenges such as the roof problems of the new sanctuary were resolved, opportunities such as the purchase of the house at 1265 Fort Street were realized, and the organ grew to 479 pipes. During his tenure, plans for a housing project on the site were contemplated. At the time of his leaving in 1985, the membership had grown to 358 baptized and 280 confirmed members. The congregation, active in the wider church and thriving, was known as a jewel.

The congregation’s history to this point has relied on material gleaned from the various historical booklets that were written for the congregation’s 25th, 60th, and 75th anniversaries as well as a booklet for the 1957 dedication of the original  church on Fort Street. Following are a few highlights that are important to mention, although a good sense of the history of GLC from 1985 to the present is discovered by reading the rest of the 100th anniversary book.

The Rev. Sean McMillan followed Pr. Nelson and inaugurated a period of great difficulty and sadness for the congregation, not to mention leaving it within a year in financial difficulty. The Rev. O. Jack Larson—Pastor Jack—arrived in 1986 and is fondly remembered as a mover and shaker. GLC saw substantial growth once more, envisioned and completed the building’s last renovation, and was renewed in its sense of mission.

Through its history, GLC has welcomed several interns and nurtured these pastors-in-training in their calling. During the latter part of Pr. Jack’s tenure, Greg Barker came to Grace for his internship year. Upon ordination, he was called to a team ministry with Pr. Jack. The two worked together for four years. Pr. Greg had a great impact on the ministry of GLC. Influenced by the Willow Creek Ministry Model out of Chicago, various aspects of this influence took root in part of the GLC community and flourished. There was much innovation and excitement for many. Unfortunately, upon Pr. Greg’s leaving in 2001, many of the gains made were lost as people devoted to him left as well.

With the formation of the Evangelical Lutheran Church in Canada (ELCIC) in 1986, GLC became part of the BC Synod, ELCIC. Through Pr. Jack’s and Pr. Greg’s pastorates, involvement in the wider church was not emphasized, which led to quiet conversations around the question of remaining part of the Lutheran church or becoming a community church. Eventually the discussion was resolved prior to Pr. Greg’s leaving with GLC not only continuing to be a Lutheran congregation within the tradition as expressed in the ELCIC but also to begin, once more, to strengthen these ties to the wider church.

It took a while to find Pr. Greg’s replacement. During this time the congregation was thankful for the gracious interim of the Rev. Gerry Mitchinson. In 2002, Rev. Ron Bjorgan arrived; his strengths brought healing to the congregation and built many bridges both within and without the faith community. He is especially remembered for his gentleness and the way he wed his talent for woodworking with his ministry. Having accepted a call elsewhere, Pr. Ron left in early 2006. For several months, the Rev. David Lefsrud was the interim pastor.

In May 2006, the congregation extended the call to its first female clergy, Rev. Brenda Nestegaard Paul. Pr. Brenda was innovative and wasn’t afraid to try new things. Her husband, the Rev. Ian Nestegaard Paul, served in the children’s ministry at GLC prior to accepting a call to the Sunshine Coast. Pr. Brenda left GLC in 2013 to follow their spousal practice of alternating calls. During her time at GLC, she mentored members who now serve as a deacon, Brigitte McKenzie, and a pastor, the Rev. Aneeta Saroop.

“Whoever you are and wherever you are on your journey of faith, you are welcome in this place.”

Through the years, in between regular calls, there have been many clergy who have been willing to serve on a short-term basis; most recently ,the Reverends James Hill, David Lefsrud. and Lenora Grauer.

Grace Evangelical Lutheran Church thanks the City of Victoria for a three-year (2020-2022) permissive exemption from property taxes.
This exemption allows us to fund more of the supportive programs for those in need in our community.

We gather on the traditional unceded territories of the Lekwungen peoples, including the Songhees, Esquimalt, and WSÁNEĆ nations.